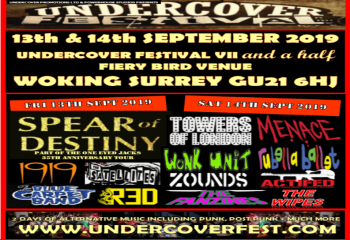 Undercover Festival VII and a half

Keep this date in your diaries folks!

Undercover Festival is coming back home to Woking for a one off weekend of top quality alternative music at Fiery Bird Live Music Venue Woking on 13th & 14th September 2019.

Including Spear of Destiny (Fri) coming to Woking as part of their UK tour, celebrating the 35th anniversary of their seminal album “One Eyed Jacks” in full.

Keith Woodhouse will be MC’ing and Trev Bossom DJ’ing between bands both days.

Fiery Bird venue is located 2 mins from Woking station 25 mins direct from Waterloo and direct from Portsmouth.
10 mins from M25/M3/A3 with parking opposite (Victoria Way car park), and a hotel attached.

With the exception of “These Days Are Gone”, “Playground of the Rich” and “Prisoner of Love”, all songs had been performed live by the original Spear of Destiny line-up for nearly a year prior to the recording of One Eyed Jacks. “Everything You Ever Wanted”, “Attica”, “Rainmaker”, “Young Men”, “Forbidden Planet” and “Don’t Turn Away” were introduced to live sets in March 1983, with “Young Men” going by the title of “Remembrance (Every Other Day)”. “Liberator” was introduced to live shows in the early summer of 1983. The final live performance of the original line-up of Spear of Destiny took place on 9 June 1983, followed by a television studio performance on 8 July.
August saw Spear of Destiny return to the stage, this time with the introduction of Dolphin Taylor on drums, Neil Pyzer on saxophone, piano, and organ, and John Lennard on saxophone. The new line-up featured a dramatic reworking of the songs that were to eventually become One Eyed Jacks, along with the introduction of “Playground of the Rich” and “Rosie”, a song that would later be featured as the b-side to the line up’s first recorded output, the single “Prisoner of Love”. A tour in November premiered “The Last Card”. Although it proceeded the release of One Eyed Jacks by six months, “The Last Card” would not be featured on a studio recording until the release of the “All My Love (Ask Nothing)” single in 1985.
“Prisoner of Love” was added to the live set in December 1983 and would be released as the first single for the record in January 1984. By this time, John Lennard had left the band, replaced by Mickey Donnelly. The band also added Alan St Clair as a second guitarist. St Clair had previously worked for Kirk Brandon as a guitar technician.
The album remains a classic in Spear’s back catalogue and a firm fan favourite.