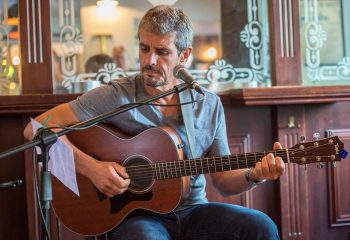 Woking Now & Then- we are thrilled to host three Woking acts as an acoustic celebration of Woking’s music scene past and present.

Steve Brookes is the driver behind the event to raise funds for Phoenix Cultural Centre CIC and their quest to secure a permanent live music and cultural venue for grassroots music and touring bands in the town. Steve co-founded The Jam with Paul Weller in 1972, he will share a few insights into how it all began for Paul and him and play some of the songs from his musical journey. As well as a fantastic soloist Steve is an entertaining and witty story teller, his book Keeping The Flame about the early years of the Jam and his music life being highly acclaimed. His unique position as a founder of one of the UK’s most important bands and a prolific gigging musician on the local and wider scene today will make for an entertaining evening of music and chat

Phoenix Chroi though a post punk/new wave slant this band, from Woking, have a variety of sound that has made their acoustic sets so popular at home and further afield, fielding their poetic lyrical songs to new audiences. They know Woking inside and out and it is often woven into what they write about. Knowing how important music has been to Woking they work to make a place happen where it can continue and thrive for generations

Rebecca Jayne another Woking artist and ready to take the future- she released her debut single in 2016 it received critical acclaim and made it into the top 100 iTunes Country Charts. Having spent time in Nashville playing at various venues she has been proving her talent both at home and abroad captivating audiences with her beautiful vocals and guitar skills. Rebecca Jayne is another Woking artist who has played many times for her local venue and a supporter of all it is trying to achieve.